How soon before an election can I register and be able to vote?

I’m not sure if I’m registered?

You can confirm your registration status on this website by going to Am I Registered? where you will select one of two methods for conducting your search. You can base your search on: 1. Your first and last name; or 2. Your Voter Unique Identifier (VUID). Or, you can call our office at (915) 546-2154.

What if I lose or never received my Voter Registration Certificate?

New certificates are mailed out every two years to the most recent address you gave to the Voter Registrar. If you do not recall receiving a new certificate, it could mean that you have moved without updating, or there is some other problem with your registration. If the certificate was mailed to an old address, it would have been returned to the Voter Registrar, and you would have been placed on the “suspense list” in El Paso County. This means you have a grace period that allows you to vote in the same county in your old precinct, but if you do not vote your name will be removed from the polls after two federal elections have passed since you were placed on the suspense list. If you did not receive your certificate because you moved to a new Texas County, you will need to re-register.

If you lost your Voter Registration Certificate, call us at (915) 546-2154 and we will issue you a replacement certificate.

What is early voting?

Texas enables residents to vote in the days and weeks before an election to make the voting process more convenient and accessible. There are two ways to vote early: By showing up in person during the prescribed Early Voting period or by voting by mail.

Generally, Early Voting in person begins a few days before Election Day. Vote at a location in your political subdivision that’s close to where you live or work. All other voting rules and procedures apply- e.g., eligibility and location hours. For available Early Voting Locations, visit the Early Voting page a few weeks before every election.

You may vote early by mail if:

For more information in regards to the Civilian Ballot by Mail process, click here.

What will I need in order to vote in person?

Acceptable Forms of Photo I.D.
Does not require voter to complete a Reasonable Impediment Declaration at polling place:

What does “substantially similar” mean?

A voter’s name on the identification provided (acceptable form of photo ID, or supporting form of ID, if applicable) is considered “substantially similar” if one or more of the following circumstances applies:

If I have a government issued identification that contains my photo and it is not on the list above, may I use it?

If you do not have one of the forms of identification listed above and your Voter Registration Certificate does not have a disability exemption noted, you will only be eligible to cast a provisional ballot.

What happens if I refuse to show proof of identity?

Voters who refuse to show proof of identity will be allowed to vote a provisional ballot. However, please be advised that a refusal to show identification is not a valid ground for casting a provisional ballot, and it is likely that the voter’s ballot will be rejected by the ballot board.

Do I still need to bring my Voter Registration Certificate? Will I be able to vote without it?

Please note that you can contact our office at (915) 546-2154 to obtain a replacement Voter Registration Certificate.

I am reviewing this page and nothing makes sense to me. These are not the rules I have heard. I’m in a state other than Texas, does that matter?

If you are visiting our website from another state, please remember that each state has slightly different laws and rules. There are laws and rules described by Texas State Laws and are intended for voters who consider their permanent residence to be in Texas and want to vote a Texas ballot. If you arrive at this page through a search engine and you need another state’s election law, check the National Association of Secretaries of State page for other state websites.

Where Do I Vote?

What To Expect When Voting 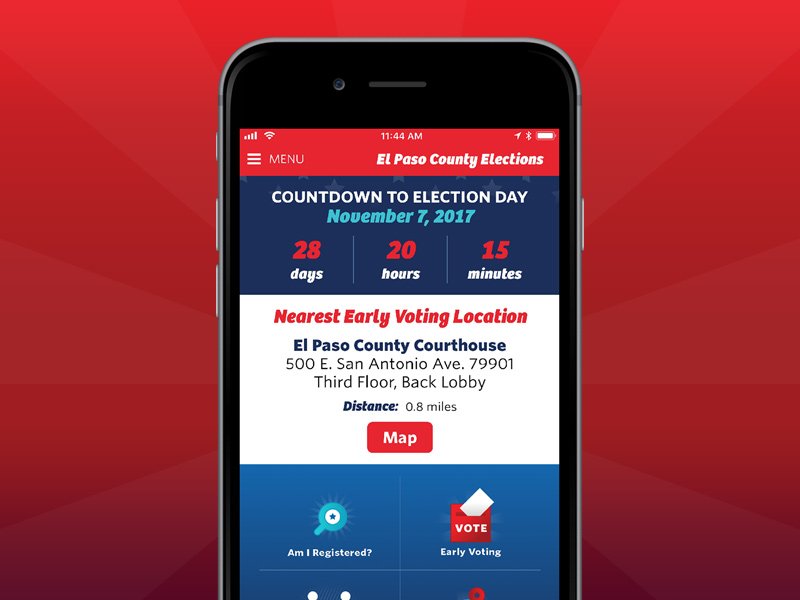 The El Paso County Elections Department app is the essential app for voters in the El Paso, Texas region. See if you are registered to vote, find your nearest early voting location, look up your polling location, and get all of the information you need to prepare for election day!